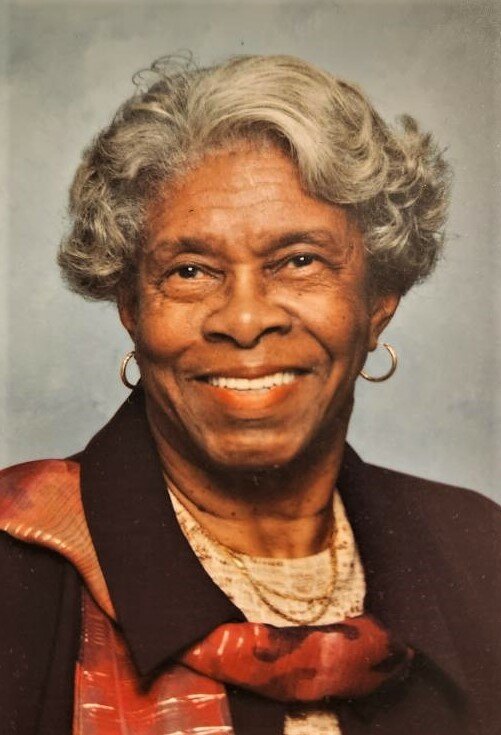 Letha Mae Johnson was born on January 10, 1931, to James and Oletha Rogers Huggins. She was the last to survive in a large family. She’s preceded in death by six brothers, William, Fletcher, Sonny, Otto, Rosco and Olin D.; and two sisters, Vivian Jacobs, and Ruby Mae Stroy.

Letha grew up in South Carolina attending and graduating from Butler High School. Soon after graduation she moved to New York with her husband, Herbert Johnson and baby girl, Lindell.

In New York, she joined the Metropolitan A.M.E. Church where she became an usher and served faithfully for many years. She was a people person, always willing to chat and listen. Letha had many oppositions to overcome in life but faced them all as a proud strong determined woman who lived life by her choices.

Letha began her path as a single woman in 1962. She attended junior college in New York, worked at Chase Bank and assisted at her brother’s fish market. Other positions she held, influencing her work longevity were as an avid Sales Rep for Excel Communication and Noni Juice. She provided a wonderful life for her daughter, teaching her how to lead, follow and be an active member in life. Letha later established her business “Lee’s Fishery”, which flourished for numerous years.

Later in life, Letha met and married Earl Johnson, a retired fireman and expanded her family with two daughters and a son: Pat, Kathy, and Earl, Jr.  They moved to Columbia, SC in 1997 after she retired from food sales, saddening many of her customers who loved her outstanding cooking skills.

Letha did not stay retired long. She joined the St. James A.M.E. Church and continued to work as a Noni Juice Rep. In her later years, she joined the senior grandparent's program within the grammar school system, where she was a teachers aid with for 1st and 2nd graders. Letha loved life, loved her family, loved her St. James family, and loved the Lord.  While living in Columbia, SC, she found joy, satisfaction, developed long-lasting friendships and connected with affluent leaders. She vowed never to leave home again. Over time Letha became ill with Alzheimer's, one of her last and greatest challenges. She fought valiantly, just shy of her 92nd birthday, passing away on November 5, 2022.

Sleep on dear Mother, get your rest, we love you, but God loves you best.

For those unable to attend, the service will be streamed live via the following link: https://client.tribucast.com/tcid/5782265655

Share Your Memory of
Letha
Upload Your Memory View All Memories
Be the first to upload a memory!
Share A Memory