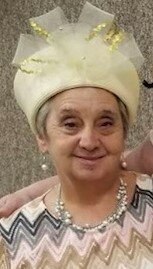 GASTON—Bobbi Lynn Ferguson, 64, passed away on Tuesday, June 7 at the home of her son. Born on July 22, 1957, she was a daughter of the late Robert L. Allen, Sr., and Annie V. Allen. She grew up attending Greenville Evangelistic Church and later was a member of Bethel Assembly of God in Lawton, Oklahoma. Bobbi was a good woman, who would’ve done anything to help anyone.

In addition to her parents, she was predeceased by a daughter Angela Lynn Ferguson; brother, Robert L. Allen, Jr.

Thompson Funeral Home is assisting the family with arrangements.

To send flowers to the family or plant a tree in memory of Bobbi Ferguson, please visit Tribute Store

Share Your Memory of
Bobbi
Upload Your Memory View All Memories
Be the first to upload a memory!
Share A Memory
Send Flowers
Plant a Tree