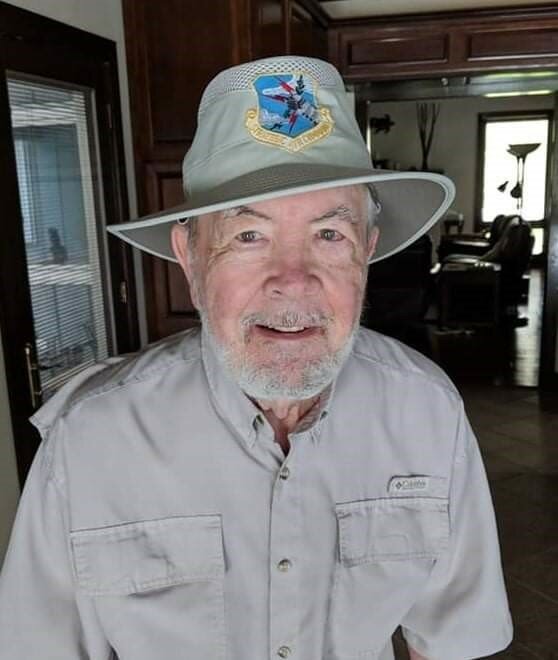 Jay was born to the late Hannis T. Latham Jr. and Willie O’Quinn Latham in Bath, NC on February 21, 1935. Jay grew up in Washington, NC, and graduated from Washington High School in 1953. He then attended UNC Chapel Hill, where he obtained a BA in Radio, TV and Motion Pictures in 1957. While in college, Jay (or “Flip” as he was known in Chapel Hill Jazz circles and to close friends), played saxophone in a local jazz band. He also worked at WCHL  AM doing play by play coverage for UNC football and basketball games.

Upon graduation from UNC in May of 1957, Jay was commissioned a Second Lieutenant in the U.S. Air Force through the AFROTC program. After pilot training, he was assigned to the Strategic Air Command in Lincoln, NE, co-piloting B-47 Stratofortress Bombers. It was while stationed in Lincoln that he met the love of his life, Sandra “Sandy” Sue Krebsbach, a young nurse employed at Lincoln General Hospital. After a whirlwind courtship, they were married on November 4, 1961. Jay left the Air Force in 1963 and the couple moved to Chapel Hill,  NC, where Jay took an on-air position with WCHL AM (again). Then from 1965-1970, he worked in news reporting at WIS Radio and TV in Columbia, SC. Next, Jay worked with public TV, where he produced and hosted two regionally syndicated television news programs (“Camera South” and “Southern Prospective”). In 1976, Jay completed graduate studies in Journalism at USC in Columbia. Jay then accepted a position with the USC School of Journalism, where he taught radio and television news reporting until his retirement in 2001.

PaPa Jay, as he was affectionately known to his grandchildren and great grandchildren, was a loving family man with a quick (but not always appropriate) wit. He enjoyed tinkering with his ham radio and contacting other operators around the world. He was also a frequent teacher in the George Huggins Sunday School Class at Shandon United Methodist Church, where he and Sandy developed many close and longstanding friendships.

A private family memorial service will be held at the Shandon United Methodist Church Columbarium Garden on a future date to be determined. The family suggests that any memorial gifts be made to Harvest Hope Food Bank.

To send flowers to the family or plant a tree in memory of Jarvis "Jay" Latham, please visit Tribute Store

Share Your Memory of
Jarvis "Jay"
Upload Your Memory View All Memories
Be the first to upload a memory!
Share A Memory
Send Flowers