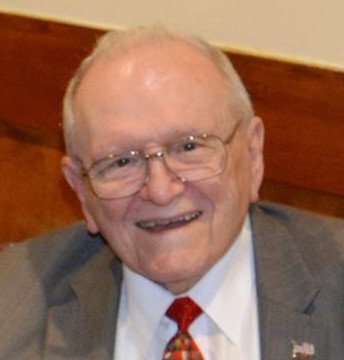 George Edwin “Ed” Barton, Jr., 93, resident of West Columbia, husband of the late Jennie Ackerman Barton, passed away peacefully on January 29, 2021 at Wellmore Skilled Nursing Lexington. They would have celebrated their 75th wedding anniversary in June 2021.

Born May 25, 1927 in Charleston, SC, he was the son of the late George Edwin, Sr. and Helen Ernestine Almers Barton. Mr. Barton entered the US Navy after high school and served our country in World War II on the USS West Point (AP-23) in the European, Mediterranean and Pacific theaters. Following this tour of service, Ed returned home and joined the US Army Reserve. He entered law enforcement with the Charleston County Police Department until he resigned to accept a position as a State Trooper with the SC Highway Patrol where he retired as Lieutenant after 33 years. He reenlisted in the Army and served another tour of active duty and finished his military career in the Army Reserve until he transferred to the retired reserve as Chief Warrant Officer 4 after over 43 years of military service.

He was very active in his community. In the Grand Lodge of Ancient Free Masons of South Carolina, Ed was Past Master of Springdale Lodge No. 412, Past District Deputy Grand Master of the Eighth Masonic District, Past Chancellor and Masonic Education Committee Member and member of many appendent bodies including National Sojourners, Heroes of ‘76, Scottish Rite, York Rite, Eastern Star, Shrine, SC Masonic Research Society and Master and Warden’s Clubs. In the Travelers Protective Association, Ed served as National, State and Post President; National State and Post Director; and served on many National, State and Post committees as member and chairman. He was a Vice Commander of the American Legion and Chaplain of the SC Highway Patrol and the SC Law Enforcement Officer’s Association. Ed was a Kentucky Colonel and a member of the National Troopers Association, Reserve Officers Association, US Army Warrant Officers Association and USS West Point Association. He was an active member of Episcopal Churchs near the various places they lived. He served on the Vestry and as lay minister. Most recently he was a member of All Saints’ Episcopal Church in Cayce. Ed loved his family and was very proud of every accomplishment of his children and grandchildren and loved them unselfishly.

The family will hold a joint Memorial Service for Ed and his wife at a future date followed by interment at the Fort Jackson National Cemetery.

The family requests that those wishing to make memorials do so to the Memorial Fund in Ed’s name at All Saints’ Episcopal Church, 1001 Twelfth Street, Cayce SC 29033.

Share Your Memory of
George Edwin "Ed"
Upload Your Memory View All Memories
Be the first to upload a memory!
Share A Memory
Plant a Tree