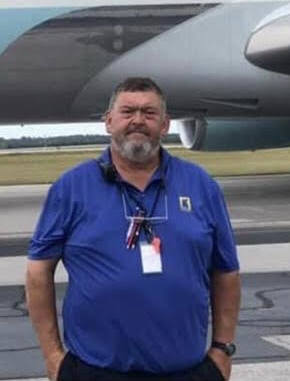 Aaron Shane Frazier, 57, of Lexington, South Carolina passed away on Sunday July 5, 2020 after a brief battle with lung cancer. He was born in Omaha, Nebraska on May 15,1963 to the late Kenneth and Gloria Frazier.

Aaron served as a MS3 in the United States Navy for eight years.  After his service, Aaron worked as an owner operator and commercial truck driver for 30 years. Afterwards, he went on to work his dream job at Eagle Aviation as a lineman.

Aaron was a member of Saint David’s Lutheran Church and would volunteer his services to the church’s youth group. Aaron was a lifetime member of the VFW Post 8738. His heart was his grandchildren and he had many cherished friends. Aaron loved cooking, socializing, hunting deep-sea fishing, and spending time with his family.

The funeral will be held Wednesday July 8, 2020 at Saint David’s Lutheran Church, 132 St. Davids Church Road, West Columbia, SC 29170 at 11:00 am with visitation in the Narthex at 10:00 am. The family will greet people after the graveside service.

The funeral will be streamed live at stdavid.net

Memorials may be made to :

Share Your Memory of
Aaron
Upload Your Memory View All Memories
Be the first to upload a memory!
Share A Memory
Plant a Tree