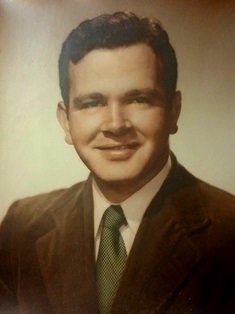 Jim attended Chapman High School and was active on the football team and the marching band.  He went on to attend Clemson College where he studied and played tuba in the marching band and the dance band the Jungleers.  His studies were interrupted by post WWII service in Germany. Jim graduated with a degree in architecture in 1949.

He moved to Columbia, found work as an architect and met his future wife Olga Trevor Edwards. They were married December 15, 1951.

Jim was a member of the original South Carolina Philharmonic Orchestra and was a soloist in their production of “Tubby the Tuba” in 1956. He later played in the Columbia Community Band. He was a painter, primarily in watercolors, and had his works displayed in Brookgreen Gardens and was also recognized for his talent by the SC Watercolor Society. He did volunteer work with the Boy Scouts of America and Washington Street Methodist Soup Kitchen.

He was predeceased by siblings; Mary Gregory, Jane Hinnant, and John Cothran.

Funeral service will be held for Jim at 3 PM on Friday, August 9, 2019 at Columbia First Baptist Church, 1306 Hampton St., Columbia, SC 29021 with visitation one hour prior to the service. Burial will follow at Elmwood Cemetery. Thompson Funeral Home of West Columbia is assisting the family.

To send flowers to the family or plant a tree in memory of James "Jim" Cothran, please visit Tribute Store
Friday
9
August

Share Your Memory of
James "Jim"
Upload Your Memory View All Memories
Be the first to upload a memory!
Share A Memory
Send Flowers