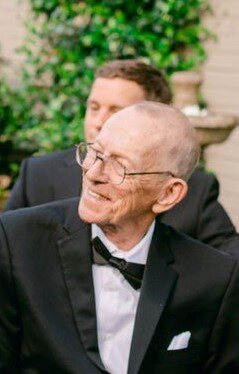 Jerry entered the Army in November of 1960 shortly after high school graduation. He trained as an x-ray tech after basic and then went to Korea in 1961. He also served two tours in Germany. In 1971, Jerry was sent to Vietnam during the war. Returning to the USA in 1972, he was stationed at Fort Jackson, SC until his retirement in 1980. During his time in the service, he earned a Natural Defense Service Medal, Vietnam Service Medal, Vietnam Campaign Medal with DVC 60, an Armed Forces Expeditionary Medal, and a Good Conduct Medal.

Jerry loved NASCAR and the Braves. If a race or a game was on, he dropped everything to watch it. He always liked to have a pretty lawn and in the summer he spent a lot of time grooming it.

Jerry (Grandpee) truly loved his grandchildren and enjoyed watching them grow into beautiful girls and handsome young men. He never thought of his step-children as anything but his own. When one brought a friend home, he answered to Mr. Sorrentino or Mr. Martin, depending on what friend it was.

He will be truly missed.

Share Your Memory of
Gerald
Upload Your Memory View All Memories
Be the first to upload a memory!
Share A Memory