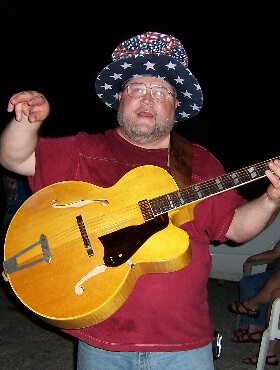 He grew up in the West Columbia area and attended Airport High School where he met and later married his high school sweetheart, Evelyn. He worked for Michelin for 30 years before retiring.

Tim was a good friend and faithful to his family – always willing to lend a hand or spare a dime. He found a way to enjoy so much from life, whether it was through his music, dressing up for Halloween, as the spirit of the Fourth of July at the Gilbert Peach Festival, as a very believable Santa Claus, or being the “fun uncle.” He was unique. He was loving and lovable. He was unforgettable and will be greatly missed.

The family would like to give a special thanks to Danny Kyzer and Glenn Purvis.

Visitation and a celebration of life service will be conducted with family and friends on Tuesday, October 25, 2022 with Visitation 1:00-2:00 pm and Service beginning 2:00pm at Thompson Funeral Home Lexington, 4720 Augusta Road, Lexington, SC 29073. In lieu of flowers, donations can be made to the charity of your choice in the name of Tim Taylor.

Share Your Memory of
Tim
Upload Your Memory View All Memories
Be the first to upload a memory!
Share A Memory