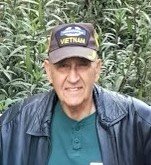 Roberto Caldera, 82, of Blythewood, SC passed away at his home October 10, 2022.  He was born April 26, 1940 in El Paso, Texas to Francisco and Magdalena (Armendariz) Caldera.  Roberto honorably retired from the United States Army as a Command Sergeant Major after 27 years of service and after 16 years of service from the Richland County Sheriff’s Department.  Roberto had a passion for the outdoors.  He enjoyed hunting, fishing, and reading.  But most of all, Roberto especially loved spending time with his family.

Roberto is survived by his daughters, Mersini (Sonny) Chavis, Demetra Caldera, and one granddaughter, Alyssia (Chris) Jay.  He is also survived by daughters, Selina (J. Ross) Pepper, one son, Richey (Kelly) Caldera and one grandson, Dakota Caldera.  In addition to his children, he is survived by sisters, Josie Russ, Magdalena Rodriguez, and Maria Dolores Caldera along with his beloved dog, Daisy.

Roberto is preceded in death by his parents, his brother and his beloved wife Mersini.

Mr. Caldera will have a visitation for family and friends on Thursday, October 13, 2022 from 6pm until 8pm at the Thompson Funeral at Greenlawn Memorial Park in Columbia SC.  Roberto will also have a funeral service on Friday, October 14, 2022 at 2pm at the Thompson Funeral Home at Greenlawn Memorial Park.  A graveside service with full military honors will follow at Serenity Gardens Cemetery immediately following the funeral service on Friday.

Share Your Memory of
Roberto
Upload Your Memory View All Memories
Be the first to upload a memory!
Share A Memory