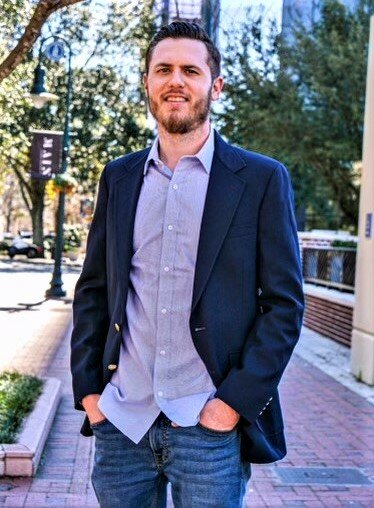 IRMO—Schuyler Kevin Carter, 32, passed away peacefully surrounded by his family in prayer on Thursday, August 25, at Lexington Medical Center.

Born in Columbia and raised in Bluffton, SC, Schuyler graduated from Bluffton High School and attended the University of South Carolina’s Beaufort Campus. When only a few courses shy of graduating with a degree in hospitality management, he was diagnosed with Melanoma that eventually took his life at such an early age. Schuyler was a dedicated Christian, devoted father to his son Conway, and a huge Gamecock fan. He was, and remains, the light of his mom’s (Mandy Mills) life. His siblings adore him as do all who had the privilege to have crossed his path.

Schuyler worked in F&B most of his life where he met and made many friends including his beloved Bekah Johnson. More recently, he attained his realtor’s license and worked with Metro Realty Group. Schuyler loved the Lord, his family and friends, and his Monte Carlo.

Schuyler taught us all that our time on this earth should absolutely be spent laughing!

A Celebration of Life memorial service will be held at 2 p.m. Sunday, September 4, 2022, at Thompson Funeral Home of Lexington, 4720 Augusta Hwy, with the Rev. Jody Flowers officiating. The family will receive friends beginning immediately after the service until 5 p.m.  For those unable to attend, the service is being livestreamed here.

If inclined, donations may be made to the St. Jude Children’s Research Hospital here.

Thompson Funeral Home of Lexington will oversee the arrangements.

A Celebration of Life

Share Your Memory of
Schuyler
Upload Your Memory View All Memories
Be the first to upload a memory!
Share A Memory