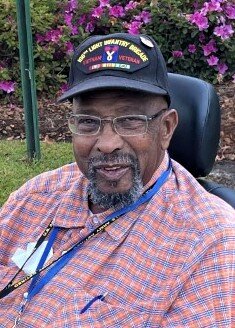 Benjamin Joseph Lymore, born February 8, 1945, to the late Clarence and Carrie Lymore. Benjamin was a career soldier for the United States Army from 1974 to 1985. After retiring from the military, Benjamin began another career at the South Carolina Department of Corrections and retired again. He departed for his eternal rest with family and his care aid at his bedside in Prisma Health Richland Columbia, South Carolina on the afternoon of August 22, 2022.

Benjamin served his country proudly. Always displaying his Vietnam Veteran Retired Army hats with pride; and he had quite the collection. During his active-duty service he excelled, becoming a Sergeant First Class prior to retirement. While serving, he survived two tours as an infantryman in Vietnam. He served two tours overseas and held multiple military occupational specialties. Not only was he skilled in infantry, but he was also a recruiter and a drill sergeant during his service time. His meritorious service has earned him the following: Overseas Service Ribbons (4), Army Service Ribbon, Expert Infantry Badge, NCO Professional Development Ribbon (2), Vietnam Service Medal (2), the Combat Infantry Badge, National Defense Service Medal, Army Commendation Medal, Vietnam Campaign Medal, Republic of Vietnam Cross of Gallantry with Palm, Bronze Star Medal (1st Oak Cluster), Drill Sergeant Identification Badge, Recruiters Badge with 3 stars, Army Good Conduct Medal (7th Award), and a Meritorious Service Medal.

Benjamin loved life. He loved to entertain, travel, cook, and spend time with his family. He made sure his family’s needs were met and tried to also make a reality for whatever they wanted.

He is preceded in death by his wife, Carolyn B. Lymore; his parents, Clarence and Carrie Lymore; five brothers, Clarence Jr., Henry, Charles, Hoyle, and Lawrence; and two sisters, Birdie Lymore and Jeannette Knox.

Share Your Memory of
Benjamin
Upload Your Memory View All Memories
Be the first to upload a memory!
Share A Memory