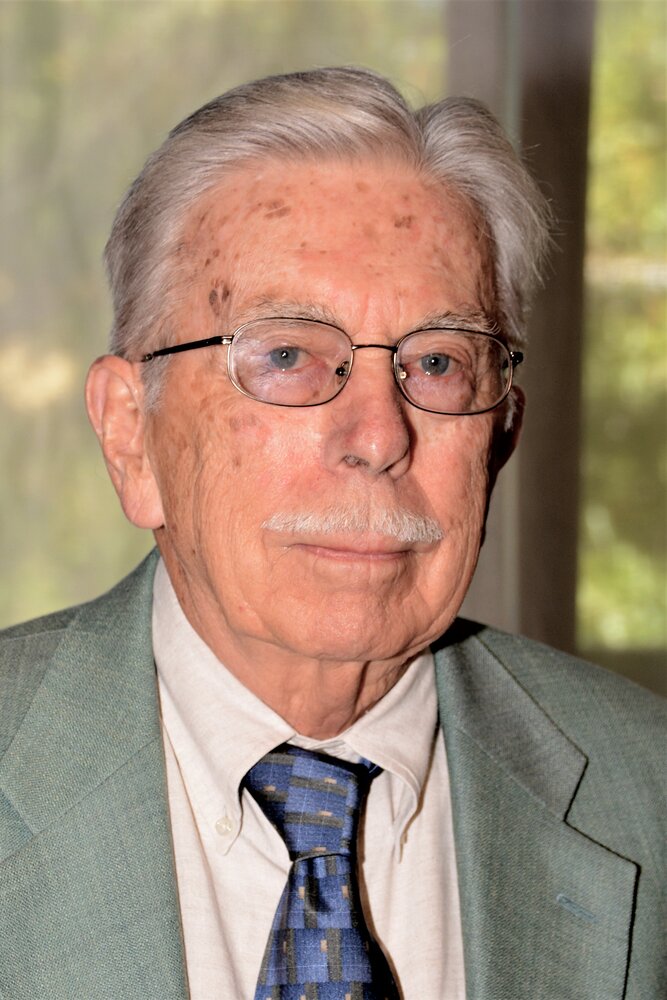 Kenneth W. Baldwin, Jr. passed away peacefully June 13, 2022. He had been a resident of Still Hopes Episcopal Retirement Community in Columbia, SC since 2016.

Ken graduated in 1943 from University High School, which was located in Wardlaw College on the campus of the University of South Carolina. Service in the Army Air Corps interrupted his studies at USC, until he returned there to graduate in 1949 with a BA in Journalism.

His early newspaper experience was in Greenwood, SC where he was sports editor of the Columbia Record. He also worked for WCOS-AM- FM-TV and at WACA in Camden, SC. In 1956, he joined the reporting staff of the Norfolk, VA-based Ledger-Dispatch, a major property of what was to become the private media company Landmark Communications with newspapers, television stations and a cable TV system located across the country.

While in Norfolk he was a sports reporter and held a number of news/editing positions prior to being named Business Editor of the Ledger. He was promoted to the position of Assistant Personnel Director of the Ledger and its morning affiliate, The Virginian-Pilot, in 1963.

After the death of his first wife, Maretha “Bobbie” Derrick Baldwin, Ken returned to the Columbia area. Although he had lived away from Columbia for nearly 50 years, family members and those who knew him understood that a part of his heart was always near his origins. Soon after returning, he renewed his ties with what was then the College of Journalism and Mass Communications at USC. When the college began a fund drive in 2008 to finance its new home at the corner of Sumter and Green streets his donation was one of the first. A suite of classrooms on the first floor now bears his name.

His prior experience as a business editor and his continued interest in journalism led to the creation of an endowed chair for a professor to teach courses with a concentration in business and financial journalism. In 2019, his generosity helped create a Social Media Interest Lab which was established by the College of Information and Communication.

Philanthropy was a way of life for him, and some of the other groups that have benefitted from his generosity were the USC College of Education, United Way, Habitat for Humanity, and Transitions of Columbia, SC.

In moving back to the Columbia area in 2002, he resumed his life-long friendship with college sweetheart Phyllis DeLoach and they married. They built a home in Blythewood, SC which they enjoyed for a dozen years before moving to Still Hopes Episcopal Retirement Community. Phyllis predeceased him in 2020. While living in Blythewood he served on the town’s Architectural Review Board and as a member of the Doko Meadows Park Foundation.

A lifelong Episcopalian, he served as a member of the Vestry, Junior Warden and chairman of the property committee at historic St. Paul’s in Norfolk and at St. Francis in Greensboro. More recently, he was a member of St. Stephens in Ridgeway, SC, and attended services in the chapel at Still Hopes while a resident there.

Ken always enriched the lives of those around him, and was known for his kindness, humility, and persistent optimism. He enjoyed golf, good conversation, and spent a great deal of his free time furthering his hobby of genealogy. Spending time with his family was always a highlight for him.

His final resting place will be in the memorial garden he helped establish at St. Francis Episcopal Church in Greensboro, NC, alongside his first wife, Bobbie.

Survivors include his daughter, Karen Baldwin Fox of Greensboro, two grandchildren, Jessica Cotten (Joseph) of Pennsylvania, and Jonathan Fox of Tennessee. He enjoyed a great relationship with Phyllis’s children, Chris Deloach (Lisa) and Nancy Stankowski (Bill) along with other cousins, nieces, and nephews. He will be greatly missed by all who knew him.

There will be a drop-in gathering for friends and family to celebrate his life on Tuesday, June 21 from 2-4pm at State and Frink Art Gallery, 2025 State Street, Cayce, SC.

To send flowers to the family or plant a tree in memory of Kenneth Baldwin, Jr., please visit Tribute Store
Tuesday
21
June

Share Your Memory of
Kenneth
Upload Your Memory View All Memories
Be the first to upload a memory!
Share A Memory
Send Flowers
Plant a Tree