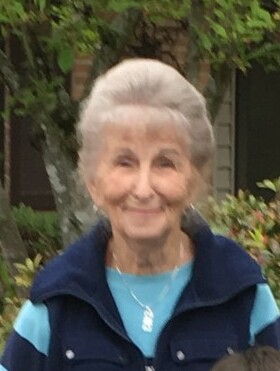 Obituary of Esther B. Sullivan

Esther B. Sullivan (Esther Gartside), of Columbia, South Carolina died peacefully, on April 16, 2022 , surrounded by her family.  Born in Rockdale, Pennsylvania on January 27, 1936, daughter of the late Thomas and Hilda Gartside,

Esther spent more than 20 years working for the Carolina Coliseum, catering to the "stars" that performed and she managed the concessions for all of the other events over the years. A few of her favorites included, Willie Nelson, John Denver, Alabama and the Ringling Brothers Circus.

Esther found great joy in spending time with her family and friends, in her yard, "digging in the dirt", caring for her flowers and feeding the birds.  She always told us to "Feed the Birds and you'll never go hungry".  She is now tending her Garden in Heaven.

A few fond memories from the Grands include trips in the "Econoline Van" to the ocean and mountains, with special rules of "Hands on the Van" for a headcount, before embarking on their adventure and you can bet that they listened so they could get special treats such as Chips and ice-cream and whatever their hearts desired.  She was also known for sending cards for holidays and special occasions to the Great Grands that included sticks of gum and stickers.

Esther was always taking care of others, whether it was cooking, cleaning or just sitting down to chat. She used to tell us that she was going to go assist " the little widows and widowers". Whatever she could do for others, provided her great joy!

Graveside services will be held on Wednesday, April 20 at 11:00 AM at Greenlawn Memorial Park, Southlake Section, 845 Leesburg Rd, Columbia, SC.  In lieu of flowers, the family requests donations be made to Shriners Children's Hospital or St. Jude's Children's Hospital.

In honor of Esther and her favorite color of Pink, we request those attending to wear a little touch of Pink.

Share Your Memory of
Esther
Upload Your Memory View All Memories
Be the first to upload a memory!
Share A Memory