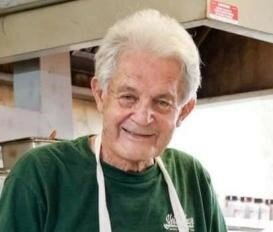 Roberto Alicea-Cruz, 86, passed away unexpectedly Wednesday. Roberto was born in Caguas, Puerto Rico to Juan Alicea and Concepción Cruz. At an early age he was sent to live with his grandparents. His grandparents and uncle operated a small bar and grocery store and it was there that Roberto attributed his ability to work with people.

At 21, he joined the US Army and served in the heavy artillery corps until 1960. He was transferred to Fort Jackson. Without an artillery division, he transferred from heavy artillery to training as a cook. Soon Roberto was working as a cook for the post commander. In addition, he worked at a Fort Jackson snack bar and the officer’s club. His military career included tours in Korea and Germany before retiring in 1976.

In 1977 his passion for cooking continued when he began working for a little sandwich shop in Five Points called Lombardi’s. A year later, the shop was purchased and became Yesterday’s Restaurant. Yesterday’s co-owner, Duncan MacRae once joked that ‘Berto came with the building. Roberto was once asked of his philosophy and he responded, “Cooking is an art. I love it when I cook something and it comes out 100% perfect. I just keep working until I get it right. And I enjoy it when people are eating my food and ask, ‘who made this?’ It’s like I always tell my friends and coworkers, ‘I like to hear compliments not complaints.’ ”

He was a member of VFW Post 641, donated to multiple charities and he was an active member the Hickory Ridge Neighborhood Association. His foundation was his Catholic faith and family was always central to his life. His love and passion for baseball was well known by all his family. He enjoyed watching the Atlanta Braves and his hometown team, Los Criollos of Caguas.

In addition to his parents he was predeceased by three sisters, Julie,Paula, Belencita and an infant son, Roberto Alicea Jr. Surviving to cherish his memory is his wife Sandy and his children, Bobby Greene, Maribel Alicea, Erick Alicea and Mayra Alicea. He leaves behind 8 grandchildren and far too many relatives to list.

Visitation is scheduled for March 5, 2022 from 1 pm to 2 pm at Thompson Funeral Home-Leesburg Road. A Funeral Liturgy will follow and interment will be at Greenlawn Cemetery.

Share Your Memory of
Roberto
Upload Your Memory View All Memories
Be the first to upload a memory!
Share A Memory