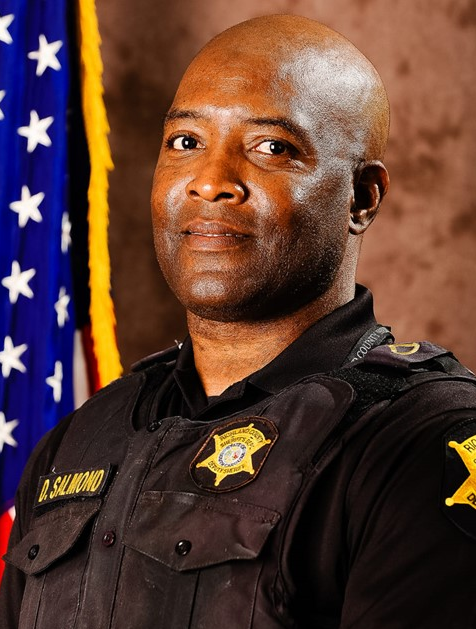 Dale graduated from North Central High School in Kershaw, South Carolina, “Class of 1986”. He received a Bachelor of Science Degree, then a Master’s Degree in Criminal Justice, with a concentration in Homeland Security from Colorado Technical University. Dale began his law enforcement career as a Correctional Officer at the Kershaw County Detention Center. He later became employed at the SC State House as a Sergeant at Arms. In January 1999, he joined the Richland County Sheriff Department, rising through the ranks in key positions as a Master Deputy, Criminal Investigator and Corporal, for 23 years, until his retirement in October 2021, as Corporal Dale Salmond.

In his younger years, Dale played football in elementary school, drove school bus in high school, was on the JROTC and Drill Team. He was always smiling and joking to brighten up everyone’s day. Dale was affectionately known by his grandfather Mitchell, as “Weasel” and by his step-father as, “nothin”. He touched the hearts of thousands over his lifetime and was also affectionately known for his charismatic charms.

Dale knew the Lord and loved Him as his Savior. He was a die-hard Philadelphia Eagles fan, loved WWE wrestling, football, the South Carolina Gamecocks, spending time with his family and friends, and his new grandson, Marquez, Jr., (MJ) whom he wanted to call him “Pop Pop”. Dale had a passion for working in law enforcement and tried to change the lives of young people in whatever capacity he could. If there was a joke to be told, he told it or made up one just to keep you laughing.

A funeral service will be held for Dale on Thursday, February 10, 2022 at 11AM in The Meeting Place Church of Greater Columbia, 201 Columbia Mall Rd. Columbia, SC 29223.  The family will greet friends Wednesday, February 9, 2022 from 6-8PM at Thompson Funeral Home at Greenlawn Memorial Park.  Dale's service will also be available via https://client.tribucast.com/tcid/3571937607

Share Your Memory of
Dale
Upload Your Memory View All Memories
Be the first to upload a memory!
Share A Memory