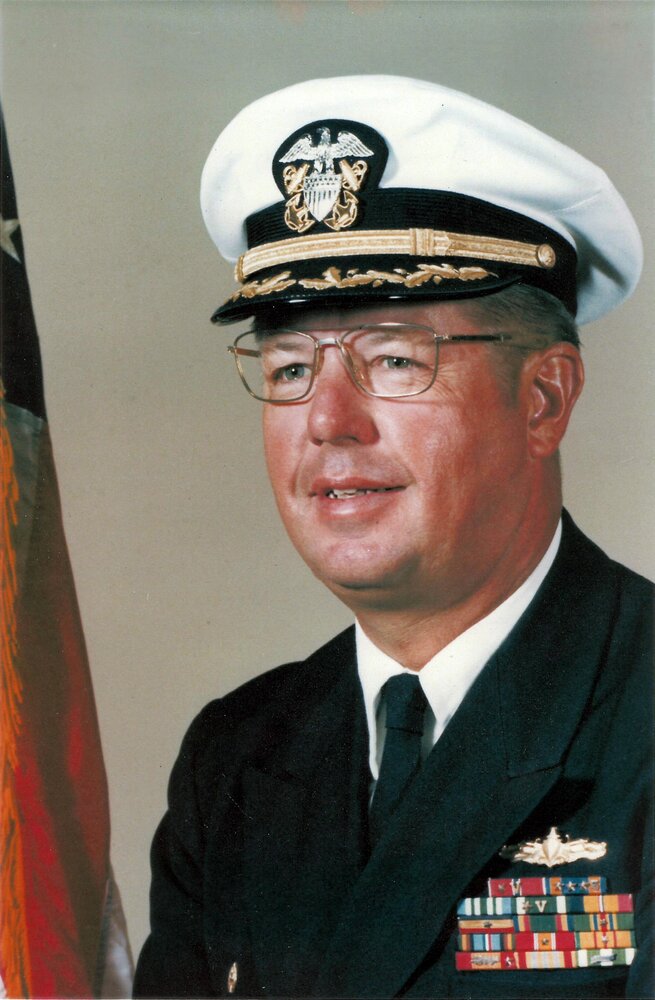 Capt. Donald Warthen, USN, Ret., died at home with family in West Columbia, SC on November 15, 2021, after months of steadily declining health. He was three weeks short of his 93rd birthday.

He was born on Dec. 7, 1928, in Tacoma Park, MD, near the family home in Kensington. He was the son of Gerald Harvey Warthen and the former Mary Shiland Bradley, and the youngest of five.

He grew up initially in Kensington, just off Connecticut Avenue. One of the highlights of his childhood was playing catch with pitching legend Walter Johnson, whose son had married his cousin. He would hitchhike to junior high school. One day President Roosevelt rode by and waved to him. On another, he caught a ride with a member of FDR’s Cabinet. After the Japanese attacked Pearl Harbor on his 13th birthday, his family moved to Asheville, NC, when the federal agency for which his parents worked was moved there for the duration of the war.

There he became an outstanding tennis player, learning the game using his big brother’s old racket. It was but one of many sports at which he excelled. He would shoot his age in golf at 68, and then do so repeatedly in subsequent years.

He was sent to Clemson College at 16. It was then a military school. The next year he left, traveling home to Asheville without consulting his parents. By the time his father arrived home that day, he had contacted the coach at Asheville-Biltmore College and obtained a basketball scholarship, to counter his father’s disappointment at his leaving Clemson.

Later, he accepted a full tennis scholarship to Presbyterian College, which was then nationally acknowledged as a powerhouse in the sport. He would earn his bachelor’s degree there, and many years later obtain a master’s degree from the University of South Carolina.

College is where he met his wife, Martha Janelle Collins, who was a student at nearby Limestone College. Friends set him up with Janelle, the belle of any ball, to help secure his social status at Presbyterian. It worked. They married in her hometown of Bennettsville, SC, on January 27, 1951, while he was still a student. Their loving union would last more than 70 years.

Having been so young, he had missed World War II, but was inspired by the exploits in uniform of his older brother and brother-in-law in the Pacific and European theaters. After college, he joined the Navy to do his part, and made “the Service” his career.

He enlisted in 1952, and served several months before attending Officer Candidate School. Commissioned as an ensign in 1953, he would master the craft of a Surface Warfare line officer on a series of ships including a minesweeper, an LST, two oilers and two destroyers. He became an exceptional navigator and shiphandler.

He traveled the globe. The family has a wall map of the world, studded with red pins marking every place he visited. There are many, many red pins. His family went along when they could, following him to such obvious Navy ports as Charleston, Norfolk, Philadelphia and Pearl Harbor, as well as to such less-expected stations as Guayaquil, Ecuador.

His family had to make do on their own when he was at sea for months or at war for a year. But when he was on shore duty, he spent every possible moment with his wife and sons. His sons treasure every moment they had with him as they grew up.

Possibly the most extraordinary duty of his career was in 1967-68, as senior advisor at Nha Be on the Long Tau River, in the Rung Sat Special Zone, a Viet Cong stronghold also known as the "Forest of Assassins." There, he commanded Navy PBR crews, Marines and a SEAL team, at a time when the SEALs were still a secret. He also directed helicopters flown by Army pilots and could call in fixed-wing Air Force strikes. It was a highly unusual joint command for such a junior officer, and General William Westmoreland came down occasionally from Saigon to see how the war was going, and to tell then-Commander Warthen he had the best job in Vietnam. CDR Warthen agreed, and believed in his mission, which was to keep the river safe for shipping to and from Saigon.

He was awarded two Bronze Stars with "V" for valor in combat, the Meritorious Service Medal, five Air Medals, a Joint Service Commendation, three Navy Commendation Medals with "V," a Combat Action Ribbon, the South Vietnamese Cross of Gallantry with Palm and Gold Star, and numerous other decorations.

For the rest of his life, he would regale his family with sea stories and experiences of his youth, exhibiting an amazing memory for names and other details, even to recalling specific meals in exotic locales.

He retired to West Columbia in 1978, and for the next 13 years continued to wear his uniform as he ran the NJROTC at Brookland-Cayce High School. He also coached the school’s tennis and golf teams. He and Janelle belonged to Shandon Baptist Church.

His parents preceded him in death by many years. He also lost all his siblings – Gerald, Bobbie, Mary Bradley and Becky.

He is survived by his wife, and by his two sons, Donald Bradley (Juanita) of West Columbia, and David Ashley (Caroline) of Greenville. He leaves seven grandchildren, who called him “Popi.” He adored them and played an even larger role in their young lives than he had in his sons’: Kathleen Ashley (Bentley), Matthew Bradley (Ashley), Andrew Phelan, Carolyn Janelle (“Nell”), Rebecca Faith, Chloe Grace and Meredith Rebecca. He was also blessed with five great-grandchildren: Devin, Carolyn, Collins, Alice and Luca. Popi made sure each child knew how to hold a fishing pole and a tennis racket, and he always rented a golf cart for them to ride the short stretch from the beach house to the water, for extra fun.

Thompson Funeral Home at Greenlawn Memorial Park is handling arrangements. The funeral will be held on Tuesday, November 23, 2021 at 12:00pm, with visitation for an hour before the service. He will be buried with full naval honors at Fort Jackson National Cemetery.

He was a fine officer, a skilled sailor, and a better man. He was the best husband, father and grandfather any man can be. His family is all deeply proud of him, and they love him with all their hearts.

Share Your Memory of
Capt. Donald
Upload Your Memory View All Memories
Be the first to upload a memory!
Share A Memory
Send Flowers