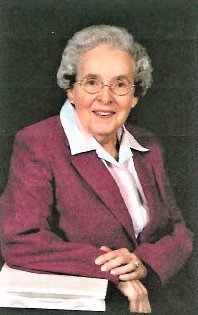 Survivors include a nephew, John J. Milillo, of Nashville, TN; a niece, Stephanie Kellerman of Louisville, KY; a great niece, Elizabeth Jane Reilly Kellerman; a great nephew, George Delbert Kellerman Jr.; and a great-great nephew and nieces. She was predeceased by a sister, Mildred Ensley Milillo.

Dr. Crowe, a retired educator, served as a teacher and principal in Richland School District Two. She was a daughter of John Alvin Ensley and Mary Wilson Ensley, being born on June 3, 1923, in Sylvia, NC. Her stepfather was the late Harry E. Marlowe.

Her father was killed in an automobile accident when she was less than 2 years old. Her mother moved her two daughters to Bryson City, NC to live with her parents, the Rev. and Mrs. J. H. Wilson. Rev. Wilson was a Baptist minister as well as a school teacher. He was very influential in developing his granddaughter’s enjoyment or reading and studying.

Dr. Crowe excelled in elementary school in Swain County, NC, graduated as valedictorian from Swain County High School, and completed Western Carolina Teachers College (now Western Carolina University) with high honors, receiving a B.S. degree in French and Science. She received a Master’s Degree in education, the Advanced Certificate in Educational Administration, and the Doctor of Education Degree, all from the University of South Carolina. Her first employment after graduating from college was as an engineering aide for the National Advisory Committee for Aeronautics at Langley Field, VA.

She was a member of North Trenholm Baptist Church, where she was a member of the Sunday School. Her hobbies were reading, quilting, watching and feeding birds in her back yard, and she loved following Gamecock sports. Dr. Crowe was a member of the SC State Museum Foundation, Columbia Museum of Art, Riverbanks Society, Nature Conservancy, Cornell Laboratory of Ornithology, Prime Times, Fort Jackson Chapter 253OES. One of her passions was the concerts of the South Carolina Philharmonic.