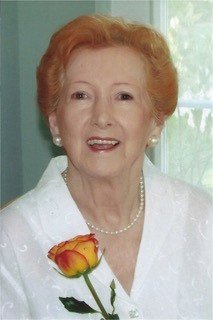 Alice Cook Brown, 96, passed away on January 9, 2021, in Columbia, S.C.  Alice was born in Concord, N.C.  After graduating from high school in 1942, friends told her there were “lots of jobs” in Washington D.C. so Alice packed her bags, hopped in their car and left for that big city with no job and no place to live.  She obtained a job working for the British Army Staff in the British War Office in Washington and remained there for three years until the end of WWII.  Alice then moved to Charlotte, N.C. where she met the love of her life, Robert Brown of Hickory Grove, S.C.  When Robert was recalled to Air Force active duty in 1950, Alice joined him at Goodfellow Air Force Base in San Angelo, Texas where they married.  During their 67 years of marriage, Alice lived in various locales as an Air Force wife with Japan being her favorite.  Upon Robert’s retirement from the Air Force in 1968, they came back “home” to Columbia.  Alice had many interests and friends and had an immeasurable and loving impact on many lives over the years.  She was also an active member and volunteer at Washington Street United Methodist Church for many years.

Alice is preceded in death by her husband of 67 years, Robert Craig Brown.

She is survived by their daughter, Robin Brown Shook (Lawrence) of Denver, N.C., and their son, Robert Stuart Brown (Becky) of Atlanta, GA.  Alice is also survived by three granddaughters, McCarley and Virginia Brown of Atlanta, GA, Lauren Shook Collier (Michael) of Vilas, NC, a great-grandson, John Collier, of Vilas, NC, and Robert’s granddaughters, Mary Falls Bailey and Rene Millwood and great-grandchildren Brooke Falls and Colin Millwood, all of Alabama.

To send flowers to the family or plant a tree in memory of Alice Brown, please visit Tribute Store

Share Your Memory of
Alice
Upload Your Memory View All Memories
Be the first to upload a memory!
Share A Memory
Send Flowers