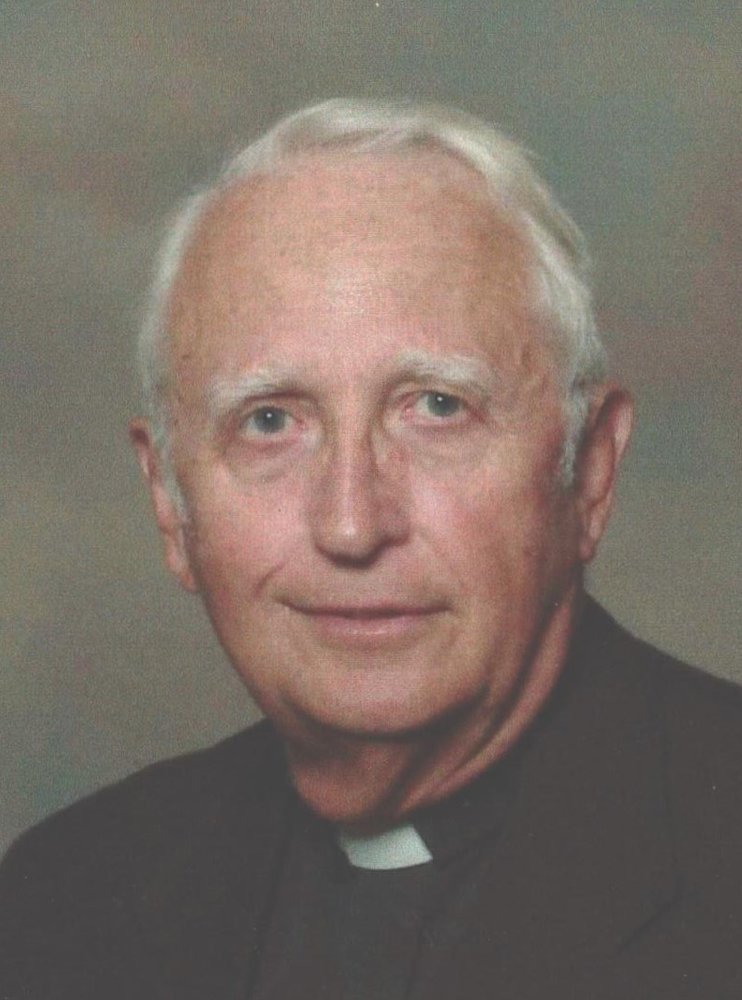 He was born in Graniteville, SC, on September 20, 1932, the son of Jesse George and Marian Williams Rushe. He attended high school at Sumter’s Edmunds High School and Brookland-Cayce High School where he lettered in football, basketball, and baseball. He was selected to the All-City and All-State basketball teams and the All-City football team. In 1949 at the age of 16 he entered the University of South Carolina on a partial basketball scholarship. He transferred one year later to Newberry College where he lettered in basketball, served as student body president, and was selected for Who’s Who in American Colleges and Universities. He graduated with honors in 1953 and was a member of the Newberry College President’s Club, the Athletic Club, and the Letterman’s Club.

Following graduation from Newberry he enrolled at the Lutheran Theological Southern Seminary. He married the former Daphne Shepherd of West Columbia in 1954. In 1955 he began holding Lutheran services in Myrtle Beach which resulted in the formation of the first Lutheran Church on the Grand Strand, St. Philip. He graduated from the seminary in 1956 and became pastor of St. Andrew’s Lutheran Church in Columbia. During his tenure at St. Andrew’s the congregation doubled its baptized membership. Shortly thereafter he was commissioned in the United States Air Force Reserve as a Chaplain, First Lieutenant. In 1958 he became the first chaplain for the South Carolina Air National Guard.

In 1960 he went into the active Air Force as a Captain and served until his retirement as Colonel in 1983. His assignments were Security Services Chaplain at Kelly AFB, TX; Religious Education Chaplain at Itazuke AB, Japan; Protestant Chaplain at Fuchu Air Station, Japan; Washington Air Defense Area Chaplain at Fort Lee, VA; Senior Protestant Chaplain at RAF Lakenheath, England; Hospital Chaplain at Shaw AFB, SC; Headquarters Strategic Air Command Chaplain at Omaha NE; Headquarters USAF Europe Chaplain at Ramstein AB, Germany; and Installation Chaplain at Barksdale AFB, LA. While in the Air Force he earned his Master of Sacred Theology degree from the Lutheran Theological Southern Seminary, graduated from the Air Command and Staff College, the Air War College, and the Industrial College of the Armed Forces. His military decorations included the Legion of Merit, Meritorious Service Medal, Air Force Commendation Medal, and National Defense Service Medal. He was a member of the American Legion, a Life

Member of the Military Officers Association of America, and the Military Chaplains Association. In 1978 he received the Master of Arts degree in Human Relations from the University of Oklahoma.

In 1983 he retired from the Air Force and became pastor of Nativity Lutheran Church in Shreveport, Louisiana which, in 1984, merged with Trinity Lutheran Church in Bossier City, Louisiana. He became the founding pastor of Holy Trinity Lutheran Church, Shreveport, Louisiana. While at Holy Trinity he earned the Education Specialist degree from Louisiana Tech University and became a Licensed Professional Counselor, serving as a volunteer counselor on the staff of the Samaritan Counseling Center. The Rev. Rushe was a charter member of the American Association of Christian Counselors. He also served as an Adjunct Professor of English at the Georgia Military College campus at Barksdale Air Force Base, Louisiana.

In 1994 he retired from the active ministry at Holy Trinity and moved to Chapin, South Carolina. For the next 15 years he continued his ministry by serving as interim pastor at nine Lutheran congregations in the Midlands—St. John’s, Lexington; Silverstreet, Silverstreet; St. Thomas, Chapin; St. Matthew, Lexington; Redeemer, Columbia; St.Luke’s Prosperity; Good Shepherd, Columbia; Bethel, White Rock; and St. Jacob’s, Chapin. He also served as a founding pastor for Immanuel, Sumter and New Hope, Ballentine, and held a Professional Counselor License in South Carolina.

His interests included music as a trombonist and organist, and golf where he held membership in the Timberlake Country Club, the United States Golf Association, and PGA Partners. He was a past president of the Board of Governors for Timberlake Plantation Owners Association.

The Rev. Rushe was blessed to be able to have two careers, serving both his Lord and his Country. He was further blessed to have a devoted and loving wife and three outstanding sons who were the pride of his life. He often said he was educated beyond his intelligence and had been blessed beyond what he deserved.

Interment will be at Fort Jackson National Cemetery. A memorial service is planned to be held at St. Peter Lutheran Church in Chapin, SC, when conditions permit. Memorial gifts may be made to St. Peter, or to any church at which he served.

The Rev. Rushe is survived by his wife of 66 years, Daphne, nee Shepherd; three sons and their wives—Randall George and Amanda Rushe of Chapin, Brigadier General (ret.) Russell Arthur and Kay Rushe of Columbia, and Dr. Todd Samuel and Ruth Ann Rushe of Seneca; and seven grandchildren—Alexander and Laura Rushe of Chapin, George Marion II and Laurence Rushe of Columbia, and Aubrey, Eric, and Shelby Rushe of Seneca. He is also survived by his sister, Joy Rushe Mann of Prosperity.

To send flowers to the family or plant a tree in memory of George Rushe, please visit Tribute Store