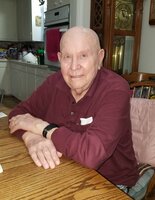 Mr. Elmer McCullough was born and raised in Batesburg, SC. He met his bride (Clara B. McCullough) while working at the SC Highway Department.

During his younger years, dad played baseball in school. Gardening, baseball, fishing, and hunting were his favorite pass times.

When the church doors opened, he was there. He served in almost every position as a Sunday School teacher, Sunday School Director, Chairman of deacons, duties in the kitchen, cook and dishwasher, nursery and children’s area. He also was ordained as a lay minister.  His bibles were always next to him. By his chair, his nightstand next to his bed. Reading his Bible daily was the only thing that could keep him from his morning coffee.

Dad helped everyone! Neighbors, friends, relatives, and those stuck on the side of the road. He volunteered with the SC Lexington Baptist Association. When the Fair came to town, he and mom cooked meals and did whatever was needed for any worker setting up at the fair. This gave him the opportunity to share the Good News to any and every one. He and Mom made several missionary trips to Rio in Brazil. He assisted with preaching and building a brick worship building. He also visited Romania sharing the Good News. He volunteered with the SC Disaster Relief. He helped on several Mud Out trips. He helped with cooking the food for other workers. He enjoyed helping with the chainsaw crews. They would ask him to come and do nothing but sharpen chainsaws.

Dad loved to work in his garden. He never asked for help until the corn harvest. All of us knew when the corn was ready, we were to come! Harvesting the corn was no task. We made it fun though! He grew enough vegetables to share with neighbors, friends, and family.

Dad retired after working for 30 years with the SC Highway Department. Because of his work in the highway department, his knowledge of bridges and roads across the state was amazing. He also served 30 years in the Army National Guard as a staff supply Sergeant. His wife called it the “Nasty Guard” because it took him away from her.

Once dad retired from SC Highway Department he became the maintenance engineer at Pine Island on Lake Murray, Sand Dunes in Charleston, and Misty Lake in North Augusta for 15 years. Then he retired from SCE&G, only to start growing a 1/3-acre garden.

As we all know dad’s work was not done. His bright eyes, quick comebacks and his love for his Father, Jesus Christ continued until he was called Home. He was always saying “God Bless”. These were not just words used in conversations, this was a request to his Savior to those he spoke with. He truly wanted God to bless each and every one of us.

In lieu of flowers, memorials may be made to Broadacres Baptist Church or Connie Maxwell Children’s Home.

For those unable to attend, the service will be streamed live via the following link: https://client.tribucast.com/tcid/6733761380