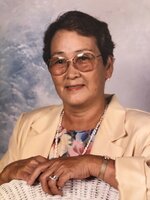 Mitsuru Nagasaki was born September 10, 1933, in Tokyo, Japan to Shigeji and Setsu Nagasaki. She grew up in Tokyo, although during WWII, she and her siblings were sent to stay with relatives outside of the city. In 1959, she married Wayne Paul Smith, of Moretown, Vermont and became a military wife. They were married by the American Consulate in Japan, the Japanese Consulate and the captain of the ship they traveled on to the United States. When they arrived at Mr. Smith’s hometown, they married in his family’s church. They had 3 children, Rena, Wayne, Jr. and Emi. The US Army sent them to various posts in Texas, Nuremberg Germany, Pennsylvania, Hawaii, Okinawa, and South Carolina. Mitzy, as Mitsuru became known, went to work for Kmart when Sergeant Smith retired from the US Army. She worked there for 20 years. Mitzy and Wayne divorced in 1983. In 1988, James Henry (Jim) Taylor won Mitzy over and they married. To Mitzy’s great joy, she gained a new daughter, Debbie and sons Jerrell and Gene, and several grandchildren with that marriage. Jim and Mitzy joined Sandy Run Baptist Church and enjoyed a loving marriage until Jim’s passing in 1998.  Mitzy enjoyed gardening and travel, but most of all she enjoyed helping people. She loved and supported her granddaughter Erika McLendon’s dance training and career and almost never missed one of her performances. Everyone who spent any time at all with Mitzy remarked on her kindness and generosity. She will be greatly missed.

Mitzy went to heaven on March 8, 2022, after a crippling illness that kept her homebound for her last few years. She is survived by daughters Rena (Angus) McLendon, Emi Smith Connell, Debbie (Mike) Houtchings, and son Jerrell (Rena) Herring, 8 grandchildren and too many great-grandchildren to count. She was predeceased by Wayne Paul Smith, James Henry Taylor, Wayne Smith, Jr. and Gene Taylor.

A memorial service will be held on Saturday, March 12, 2022 at 2pm in the chapel at Thompson Funeral Home at Greenlawn Memorial Park, with a reception following the service at the funeral home.