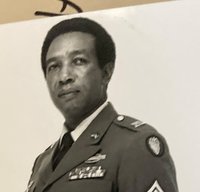 On the pulse of a beautiful sun shining day; Sunday, April 18th 2021 Mr. Alton Curtis Eason Sr. gained his wings of victory at the age of 85 he suddenly slipped away.

Alton’s father Cleveland Eason was a Minister and a Farmer, two occupations that required regular exercise of faith and dependence on God. It is on the farm that Alton developed his strong work ethics. Due to needs of the family, Alton ended his formal education and balanced work and self-education through mail-in correspondence courses. From there he received his GED.

Mr. Eason, joined the U.S. Army in 1956 during the post-Korean war era and served honorably in active duty for twenty years, 6 months and 26 days. During those years he went from E-1 to E-8. Mr. Eason, being the great man of courage that he was, served two tours in Vietnam and was awarded the “Bronze Medal” for gallantry and received two “Purple Heart Medals” after being wounded twice in combat. Prior to completing his military career, Mr. Eason along with his wife Frances “Pinky” Eason decided to make Columbia, South Carolina their home. After completion of his career, Alton went on to work within the South Carolina’s Department of Corrections, where for 16 years he managed a food service/work transition program and helped many people move from prison to productive members of society. He retired from food service and was credited for 21 years of service due to his prior military experience. Always striving to excel Mr. Eason pursued his college degree using his Vietnam era “GI bill” and graduated from the University of South Carolina with an Associate’s Degree in Criminal Science.

Mr. Alton Curtis Eason was a man of great faith and he prayed daily for his children and those that he loved. He was also ordained as a Deacon to serve at Dennis Chapel located in Columbia, South Carolina and continued his membership there until he moved away.

For those who knew “Mr. Eason” they knew that he was a traveler and his love for the road helped him to launch “Eason’s Transportation Services” where he along with the assistance of his loving wife Frances, escorted Bingo lovers from Columbia to New Jersey to Rock Hill and to the Far stretches of the mid-lands and beyond. His traveling heart earned him the nickname “Road Runner.” His love for travel didn’t start there, in his earlier years with his two brothers by his side (oldest brother E. C. and youngest brother Jesse Lee) they would make their familiar road trips up and down the East Coast to visit family and friends annually.

To view the service via TribuCast (date & time listed below), please click here or the following link: https://client.tribucast.com/tcid/514860908

Mr. Alton Curtis Eason fought the good fight of faith, he counted the cost, he endured the battle until the end. So now that you are here at his home going, there is no need to worry about Mr. “E”. He made preparations, and packed up his bags when he heard the voice of the Lord say ”Well Done my good and faithful servant your duty is over, it’s time to go home”.