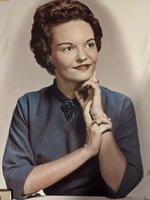 Dot was born to parents Raymond Floyd and Lucille Dorn on August 10, 1939 in Augusta, GA. She grew up as one of 5 siblings including her twin brother. She attended Olympia High School in Columbia, SC. In 1960, she married her sweetheart, Frank Hammond but had no children.

In 1967, Dot married Arnold Cleveland and the couple had one child. Dot’s career included working at the Olympia cotton mill in Columbia, housekeeping at Lexington Medical Center, housekeeping and childcare at Grace Christian School, cashier, and sitting with the elderly before she retired in 2003.

Dot is survived by her son Timothy Cleveland, her daughter-in-law Lauren Cleveland, two granddaughters, her twin brother Raymond Floyd, and a nephew. She is preceded in death by her parents, aunts, sisters, and a nephew.

Dot will be buried in a private service at Piney Grove Baptist Church in McBean, GA.  The family is grateful for condolences, but declines flowers, preferring donations to the charity of your choice or to the Alzheimer’s Association.